ARC: A Plan Comes to Light

Shining the Light on the Practical

Sutcliid asked his COO, James Waln, to interview the senior consultant—the one who understood Stucliid’s interest in spirituality and self-realization—and assess his capabilities to help ARC reverse the declining sales problem. Waln was a long-time employee and the former leader of customer service. He had a reputation as a no-nonsense leader; laser focused on results and return on investment.  Waln was skeptical of any consultant Sutcliid would like and frustrated with Sutcliid’s insistence that ARC needed a spiritual revival. He was tired of chasing irrelevant dreams of employee self-actualization. It was clear to him that ARC’s problem was a business issue, one which needed immediate attention grounded in basic business principles.  Five minutes into the meeting, Sutcliid’s chosen consultant surprised Waln by asking him to identify the process bottlenecks which were driving customer dissatisfaction. Standing up, the consultant went to the white board in Waln’s office, grabbed a marker and started diagramming Waln’s explanation of ARC’s problems. They spent an hour discussing possible causes of the bottlenecks and never once discussed spirituality. At the end, an interesting and provocative view of the company’s problems had emerged from the whiteboard.

Just before Waln was prepared to finish the discussion – completely unconvinced the consultant had really talked with Sutcliid – the CFO, Barbara Jaeger, stuck her head in the doorway to ask if Waln could talk with her for a few minutes. This was a pre-arranged agreement between Waln and Jaeger designed to help Waln end the consultant interview. But seeing  the whiteboard, she gave a puzzled look at Waln and asked about what she was seeing on the whiteboard. Standing up, Waln walked back to the whiteboard and summarized his conversation with the consultant. Nodding her head as he explained, Jaeger joined Waln and the consultant at the whiteboard, grabbed a marker , and began adding to the diagrams. There was a lot more to think about than had been discussed already. Asking the consultant if he could extend the meeting, Jaeger went to the office next door, and returned with the head of sales, Joan Schenelli.

Jaeger introduced Schenelli as Joan of ARC, the longest tenured employee still in the company, whom everyone respected and liked. Schenelli knew the company better than anyone and was very vocal about her perspective on the company’s problems. The three executives and the consultant continued to talk for another 90 minutes, discussing the root causes of the bottlenecks, customer complaints, and the loss of ARC’s big accounts.

Like Waln, both Jaeger and Schenelli were intrigued by the conversation. Schenelli even asked if the consultant had met Sutcliid. She was pleased with the business conversation but doubted Sutcliid would sanction any business perspective, particularly from a management consultant. Like her peers, she thought the problem was the CEO’s leadership style and his unwillingness to change anything his uncle had built.

After the meeting with the three executives, the consultant shared his discussion with Sutcliid assuring him the employees could indeed transform themselves and their work environment. Personal insight and self-realization could come about in the workplace if the employees were treated with respect and their opinions valued. He was also honest about ARC having all the typical problems of a fast growing company. ARC had moved past the stage of organized chaos into chaos and the employees knew how to fix the problems. If Sutcliid was willing to involve the employees in a transformation process, the company would change and so would the employees. Just as Sutcliid had trusted his spiritual teachers to show him a way to grow, he could trust the employees to  help ARC grow and realize its potential.

This all sounded too slick for the three executives. But they were in a bind. Clearly the consultant understood many of ARC’s business issues and just as clearly, Sutcliid would buy into this type of explanation. Better to hire this firm than risk Sutcliid bringing in someone who might be worse. 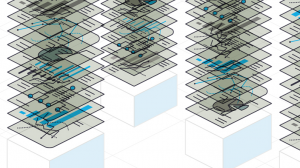 ARC’s transformation began, with a skeptical but intrigued executive team, choosing the “we-could-do-worse consulting firm.” Like most management consultants, Sutcliid’s chosen consultant started his work by  (1) interviewing employees and key leaders, and (2) administering a company-wide diagnostic.

It took several weeks to conduct all of the  interviews while also administering the diagnostic.   The combination of interview and diagnostic results provided the consultants with both subjective and hard data.

Reporting the diagnostic results to the executive team required a half-day meeting which ARC chose to have in Sutcliid’s office.  The stormy weather visible through the CEO’s office windows contributed to a heaviness that matched the gloomy demeanor of the executives gathered around the conference table as the consultants shared the results. Results which revealed  ARC to be a company with two significant alignment gaps. The first gap was a hierarchical one, the managers and executives were focused on their relationships to the executive team and their needs while the employees were focused on daily operations. The second gap was between the employees who had customer-facing roles and those that had support roles.

Customer service and satisfaction was negatively impacted by the resulting lack of horizontal coordination and information exchange.

As in most companies, the support functions, HR, Finance, and IT were strongly focused on internal issues while Operations, Sales, and R&D were focused on the customers. However, at ARC, middle and upper management were unable to bridge the gap between functions and hierarchical levels. The upward focus of middle management created an alignment gap between management and the employees. Internal communications were proving insufficient to bridge the divide.  Many employees reported more trust in  the “grapevine” than in formal communications.

The employees with customer-facing roles had to seek approval from their functional leaders before coordinating or obtaining information from other functions. Consequently, ARC was siloed by function and hierarchy. Customer service and satisfaction was negatively impacted by the resulting lack of horizontal coordination and information exchange.

The results did not shock the executive team, but they did clarify that significant changes were needed, leading Sutcliid to declare the team needed to make bold drastic changes. Waln (COO) , Kirwitz (Sales) and Jaeger (CFO) suggested flattening the organization, advocating for Sales, Service, and R&D to integrate horizontally, forming an integrated Service Delivery team. All their collective processes would run directly to the customer. Meanwhile, HR, Finance, and IT would become centralized support functions, with specific teams assigned to support the integrated Service Delivery Team. The restructured support functions would then have dual reporting relationships to the Service Delivery Team departments. Sutcliid liked the concept and hoped the reorganization would enable the spirit of ARC and the employees to emerge. Joyce Whitney, Head of HR and Jack Sharpe, Head of IT, however, were both gravely concerned. They argued the proposed horizontal configuration would be extremely difficult to implement, creating more chaos. They tried to convince the rest of the executive team that the change process would be too time consuming, requiring many months of refining after it was implemented. In addition, the prework of redesigning roles, processes, and relationships would be a nightmare. No one within ARC had the expertise to do the redesign. Therefore, they argued,  the work would have to be outsourced to yet another consulting firm, further adding to cost and time. The atmosphere in Sutcliid’s expansive office remained heavy and gloomy.

Sutcliid declared a meeting break but the executives continued to debate the pros and cons. No one had a better idea.

When the meeting was reconvened, the general consensus was that a flattened organization had merits but those were outweighed by the huge expenditure of resources required to implement with little guarantee of success. With the executive team seemingly mired in the status quo, the lead consultant stood up and walked to the whiteboard, explaining that during the interviewing process his team closed each meeting with a question, “Would you be interested in helping to fix  ARC’s problems” while handing each employee a  “ballot” with yes, no, or maybe pre-written on them. Once a choice had been checked off, the ballots were placed into a collection box.

The lead consultant was hoping the sun would choose this moment to push through the clouds and fill the office with sunshine. He liked metaphors and this certainly was the time for a positive signal.  It did not. Instead the rain became heavier. Nevertheless, he removed a flip chart page which was taped over a section of the white board to reveal:

Standing at the whiteboard, he explained the employees could redesign the company, if they understood the intent of a flattened organization, how it would work, and what it was intended to achieve. He assured the executive team that the diagnostic results indicated the employees had the most knowledge about ARC’s customers and also knew exactly how the customer delivery process worked, as that is what they did on a daily basis.

The consultant continued, “The employees, using the assessment, can redesign the organization by function, and departments within those functions. The assessment measures the mindsets, behaviors, and the processes which are the basic building blocks of the organization. The employees can meet in teams and take the diagnostic on their mobiles to indicate how the company should operate in a flattened structure. In their team design meetings, they can discuss the purpose and role of each function, which will essentially be the design principles. They will, in essence, build a functional strategic plan and redesign their functions to meet customer needs using a flattened structure.”

The executive team was overwhelmed by the concept of employees redesigning their company. Surprisingly, Joyce Whitney (CHRO) advocated for the proposed process. Despite her initial skepticism about the consultants, this idea resonated with her. She had known for some time about the problems with customer experience. Many employees had shared with her their frustrations and she heard all the messy details of the causes. Knowing this, she agreed with the consultant’s assessment. The employees did have the knowledge to do a redesign – better than any outsiders. Meanwhile, Barbara Jaeger (CFO) had been scribbling figures on a notepad. Looking  up from them she shared that an employee redesign, if it worked, would be significantly cheaper than hiring a large consulting firm to do the redesign.

Sutcliid offered his belief that this was a way to infuse the employee spirit deeper into the company. He thought an employee-led redesign would also tighten the employee connection to ARC and provide a foundation for future growth. The employees who participated in the redesign would become an invaluable core of the future workforce. The executives could not pass on the opportunity, choosing to bet on the cost savings and strengthening the company core of employees.

ARC: What to Do When Chaos Reigns continues June 28th, 2022: From Chaos to Unified Action.